Anthropocene is a more correct concept than Capitalocene

“We are in a giant car, accelerating in the direction of a brick wall

and everyone keeps arguing about where each one will sit”

[EcoDebate] The growth of the population and the economy has been such, in the last two and a half centuries, that the Nobel Prize in Chemistry, Paul Crutzen, assessing the degree of the destructive impact of human activities on nature stated that the world has entered a new geological era, that of the ANTHROPOCENO, which means “time of human domination”. It represents a new period in the history of the Planet, in which the human being has become the driving force of environmental degradation and the vector of actions that are catalysts for a probable ecological catastrophe.

The Anthropocene is a sinchronic era to urban-industrial modernity. The Industrial and Energy Revolution that began in Europe in the last quarter of the 18th century initiated the widespread use of fossil fuels and the mass production of goods and livelihoods, enabling an exponential expansion of anthropic activities.

In 250 years, the global economy grew 135 times, the world population grew 9.2 times and per capita income grew 15-fold. This demoeconomic growth was higher than that of the entire period of the previous 200,000 years since the emergence of Homo sapiens. But all human growth and enrichment occurred at the expense of shrinking and impoverishing the environment. All anthropic activities exceeded Earth’s load capacity and humanity’s Ecological Footprint has exceeded the Planet’s Biocapacity. Human debt to nature grows every day and environmental degradation can, at the limit, destroy the ecological basis that sustains the economy and human survival. 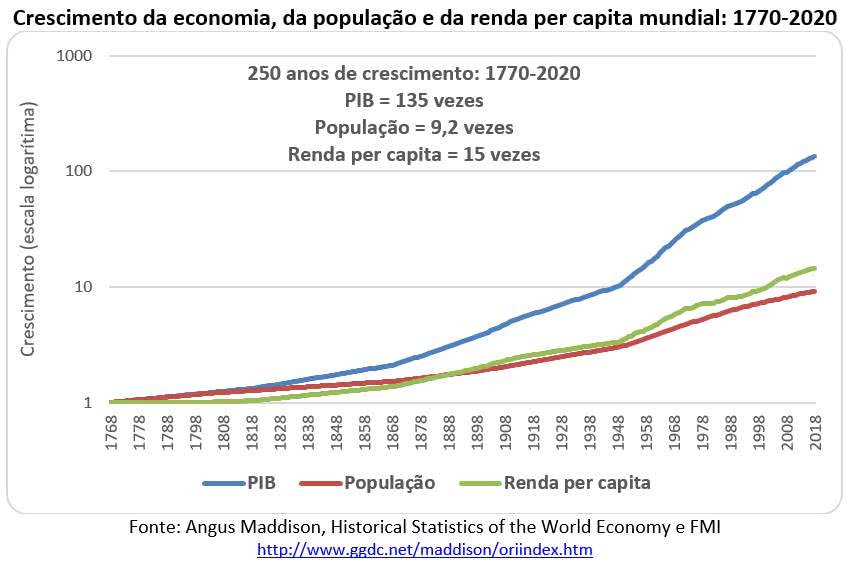 In the Anthropocene, humanity damaged the homeostatic balance existing in all natural areas. It has altered the chemistry of the atmosphere, promoted the acidification of soils and waters, polluted rivers, lakes and oceans, reduced the availability of drinking water, exceeded the earth’s load capacity and is promoting a major mass extinction of the species. Selfishness, gluttony and human greed cause irreparable damage and a widespread ecocidium, which can turn into suicide. The Earth has entered a death spiral. The sixth mass extinction of species and the climate crisis are the most urgent threats of our time. And the time to reverse this death spiral is running out. Radical action will be needed to save life on the planet. Demoeconomic progress has generated negative externalities for the environment.

Greenhouse gas (GHG) emissions broke with the level of CO2 concentration in the atmosphere, of a maximum of 280 parts per million (ppm) prevailing throughout the Holocene, and in May 2020 reached 419 ppm, rising about 2.5 ppm per year in the current decade. The amount of carbon dioxide in the atmosphere is reaching levels that mankind has never lived, never seen on the planet for more than 3 million years. But a recent study shows that in five years the Planet will reach an unprecedented carbon concentration in 15 million years. A study published in the journal Nature Scientific Reports (De la Vega et. al. 2020) shows that when the carbon concentration of 427 parts per million in the atmosphere, the planet was experiencing the probable peak of the Pliocene warm-up period 3.3 million years ago, when temperatures were 3°C to 4°C warmer and sea level was 20 meters higher than today.

With the increase in GHG in the atmosphere, the average temperature has risen and the Earth is 1.2º C warmer than the pre-industrial period, and may start a period of climate uncontrol. According to new weather forecasts published by the World Meteorological Organization (WMO), during the period 2020-2024, almost all regions, except some southern ocean areas, will have higher temperatures than the current ones. The global average temperature should remain above at least 1°C until 2024, according to the WMO. And the probability of exceeding pre-industrial levels by 1.5°C for at least one of those five years is high. Study by Steffen and colleagues (2018) that indicated that the Earth can enter a situation with such a hot climate that it can raise global average temperatures to up to five degrees Celsius above pre-industrial temperatures. The “Greenhouse Earth” phenomenon would have several implications, such as acidification of soils and waters and increases in the level of the oceans and lethal heat waves that can kill more people than the covid-19 pandemic.

Earth is a finite planet. This means that living beings have a common and delimited space for joint survival. The exponential growth of one species causes the reduction of space for the life of other species, decreasing the availability of soils and drinking water. According to the Global Footprint Network, the world’s population in 2016 was 7.5 billion inhabitants, with a total ecological footprint of 20.6 billion global hectares (gha) and a total biocapacity of 12.2 billion gha. The ecological footprint per capita was 2.75 gha and a per capita biocapacity of 1.63 gha. Thus, the Earth had a per capita deficit of 1.12 gha (or a total deficit of 8.2 billion gha). That is, to maintain human consumption in 2016 would need 1.7 planet. Therefore, the level of anthropic activities is unsustainable in ecological terms.

Of course, some people, some companies, some cities and some countries have larger ecological footprints than others. But it is the set of anthropic activities that impacts the Planet and is responsible for increasing the ecological footprint and reducing biocapacity. The main responsibility for environmental degradation is the so-called “urban-industrial model” based on the production of goods and services in bulk, with materials taken from nature and with fossil fuels as the predominant form of energy. But the production mode does not cover 100% of the production of the globe, because there are other forms of production that act in parallel. Therefore, it is said that social formation includes the dominant mode of production and the other modes of production that are subordinated. The large increase in production in the last 250 years has benefited much more a small portion of the world’s elite, but has also benefited, in a differentiated way, almost the entire world population. At the end of the 18th century, Louis XIV lived a life of luxury in Versailles, but had no electric light, television, bicycle, mobile phone, computer, Internet, etc., and other amenities that are available to the majority of the world’s population.

From the point of view of environmental impact, it does not matter whether the regime is of neoliberal capitalism, social democratic or socialist and state capitalism. Capitalism is a social relationship and it is not enough to change the owners of the means of production, but to maintain the same production base. For example, after the Bolshevik Revolution, Lenin said: “Communism is the power of the Soviets plus electrification.” And in China, Mao Té-Tung attempted the “Great Leap Forward” in the late 1950s.

As Brian Snyder said: “The second law of thermodynamics doesn’t care if you’re Karl Marx or Milton Friedman; you don’t care who owns resources or how resources are allocated once extracted. The second law is only concerned with converting energy into entropy. And eventually, everyone obeys the second law, until Stalin” (15/07/2020).

For example, communist China had an environmental surplus in the 1960s, but began to have a growing deficit from the 1970s and, mainly, in the 2000s. The world has about 12 billion global hectares (gha) and China alone has an ecological footprint of 5.2 billion gha, about 40% of all the planet’s resources. 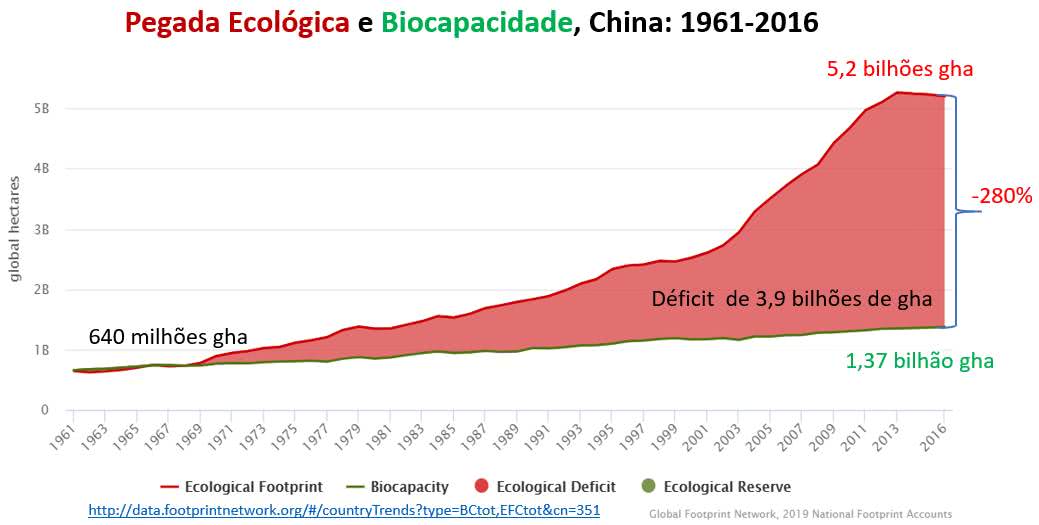 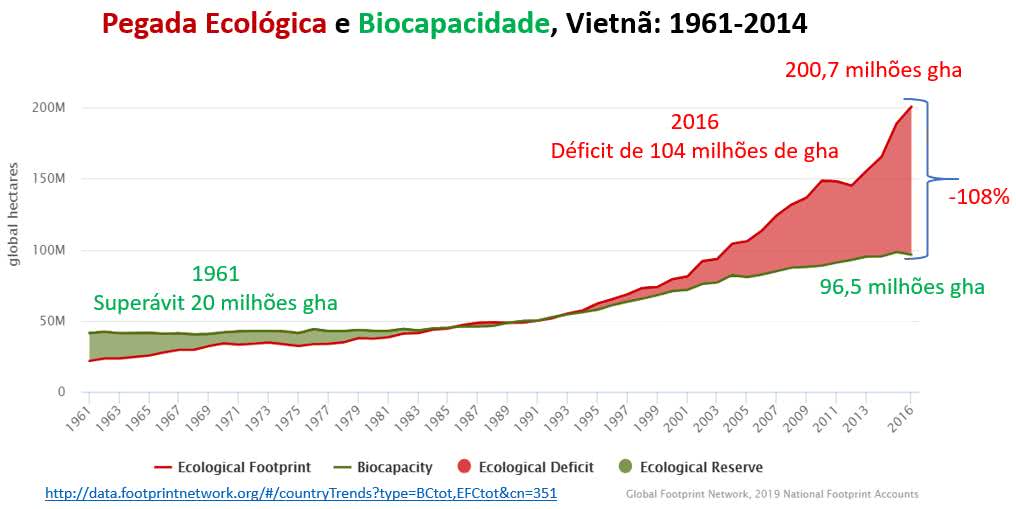 Even the African continent already has an environmental deficit, although the level of consumption is low and no one can accuse Africa of being a capitalist continent with a high level of production and accumulation of wealth.

Finally, the international economy is marked by great inequalities and, of course, the richest people consume more and degrade the environment more, the opposite occurring with the poorest people. However, the table below shows that the world’s low-income population in 2016 was 927 million people and had an ecological footprint and per capita biocapacity of 1.04 gha. Therefore, there was a balance between the two indicators and there was neither deficit nor environmental surplus. At this level of consumption, the total footprint (if all the inhabitants of the globe consumed at this level) would be only 0.64 planet and there would be environmental sustainability.

Low-income and low-middle-income populations, totaling 3.7 billion inhabitants, with an ecological footprint per capita below the global biocapacity per capita (1.63 gha) live within environmental sustainability. But they are people who have many material needs and do not have socially sustainable lives.

Undoubtedly the rich consume a lot and have a high environmental impact. But even if we eliminated the 1.13 billion high-income inhabitants – with a total ecological footprint of 6.7 billion gha in 2016 – the world would continue to have an environmental deficit, as the rest of the 6.4 billion inhabitants would have a total ecological footprint of 13.9 billion gha, up from 12.2 billion gha of the Planet’s total biocapacity.

In this way, the environmental framework of the world is more serious than simply zeroing the consumption of the rich, or simply accusing capitalism without considering that it is the whole population that consumes. The approximately 6 billion low-income, middle-income residents are already enough to put the Earth on the path to ecological collapse. Previous calculations do not take away the responsibilities of developed countries as the largest per capita polluters on the planet. They only show the real extent of the problems caused by the interaction between consumption and population.

It is understandable that the populations of poor countries aspire to higher levels of development and consumption. However, reproducing the model of rich and polluting countries would be a total disaster for the environment, with boomerang effect on humanity itself. The struggle for more income, education, health, housing, transportation, access to information, leisure, etc., is fair. However, the increase in the ecological footprint per capita is only feasible with the decrease in the volume of the population (ceteris paribus other indicators).

That is, at the present time when humanity has already exceeded the limits of the planet’s resilience there are three alternatives: 1) greatly reduce consumption; 2) greatly decrease the population; or 3) reduce consumption a little and slightly the population. The fact is that demoeconomic degrowth is the only viable way to reach environmental sustainability.

And demoeconomic degrowth needs to occur in either capitalism or socialism. Planning for sustainable development is the most urgent task to mitigate the climate and environmental crisis and to promote ecosystem regeneration. What we cannot do is maintain the current course of ecological degradation and greenhouse gas emissions that cause global warming to accelerate. To follow in the current model is to promote an ecocide and also a suicide, because without ecology there is no way to maintain life on Earth.

Humanity has exceeded earth’s load capacity and the limits of the planet’s resilience.

It will not be by exchanging the word Anthropocene for Capitalocene that we will solve ecological problems or we will avoid the threat of an environmental collapse.

ALVES, JED. The Earth would have global environmental deficit even without the rich, Ecodebate, 06/11/2019

ALVES, JED. The limits of the resilience of the Planet and the demoeconomic degrowth, XXI National Meeting of Population Studies, Of ABEP, Poços de Caldas, 25/09/2018

[CC BY-NC-SA 3.0] [ EcoDebate content may be copied, reproduced and/or distributed, provided that credit is given to the author, EcoDebate with link and, if applicable, to the primary source of the information ]

Inclusion in the distribution list of the Daily Bulletin of the electronic magazine EcoDebate, ISSN 2446-9394,

If you would like to be included in the distribution list of our daily newsletter, simply send an email to newsletter_ecodebate+subscribe@googlegroups.com. Your email will be included and you will receive a message asking you to confirm your registration.

EcoDebate does not practice SPAM and the requirement to confirm the source email is intended to prevent your email from being improperly included by third parties.

To unsubscribe from this group, please email us newsletter_ecodebate+unsubscribe@googlegroups.com or ecodebate@ecodebate.com.br. Your email will be removed and you will receive a message confirming the removal. Note that removal is automatic but not instant.