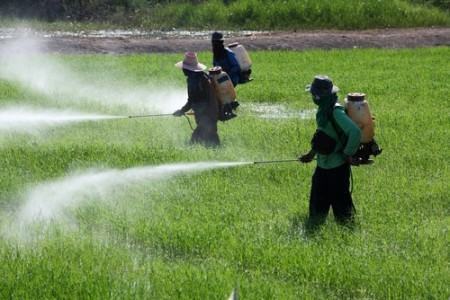 Pesticides are basically divided into contact or systemic transmission groups. The systemic pesticides, most used today, penetrate the fruit from the sap and are incorporated into the vegetable’s deoxyribonucleic acid (DNA). Therefore, they cannot be removed as physical waste. Its accumulation in the body leads to cancer, allergies in general, generative diseases and hormonal imbalances. In pregnant women, they can be teratogenic and cause fetal malformation.

Cleaning vegetables is essential to eliminate possible parasites, however, it removes only the smallest part of the pesticides used in crops. To eliminate biological microorganisms and parasites in general, the most recommended is to soak them in solutions based on chlorine or sodium chloride and potassium permanganate, products traditionally sold in supermarkets and distributed free of charge at health centers maintained by the Unified System of Health (SUS). In the absence of both, solutions of lemon or vinegar diluted in water solve perfectly.

The Brazilian already consumes an average of 5 liters per year of pesticides, many of which are banned in other countries, which are adulterated and smuggled without any control. Consuming organic products, in addition to being more recommendable for health, strengthens family farming, keeps the land in the hands of small producers, does not finance the agribusiness of pesticides and transgenics and any producer of synthetic fertilizers, which do not only contaminate food, but also the surrounding soil and groundwater.

Soaking vegetables in vinegar before taking them to the table can be great for killing microbes, but it won’t always work when you want to get pesticides out of fruits and vegetables, experts reported on media sites like G1 reported.

In 15 out of 20 cultures analyzed by the National Health Surveillance Agency (ANVISA), active ingredients were found in the toxicological reassessment process with the agency, such as cucumber and pepper endosulfan; Acephate in onions and carrots; and metamidophos in peppers, tomatoes, lettuce and onions.

For food engineer Carlos Eduardo Sassano, a professor at the University of Guarulhos, the problem would be solved if the pesticides were used correctly. “If they were used within the permitted standards, there would be no problem”, he defends. It is questioned whether there is a correct and adequate way of handling this poison.

It is worth remembering emblematic personal experience. A collaborator in the hygiene service of a large hospital, a reference in the Midwest of Brazil, within her humble and sincere conception, one night in a ward for patients with terminal cancer, she made the most relevant diagnostic finding.

Individuals of European origin, exposed to carcinogenic substances since the first industrial revolution, from the steam engine, are exposed to the spread of potentially carcinogenic chemicals. He added that these patients were largely hegemonic in that hospital wing.

Citizens of African descent, according to the collaborator, used to die by “ingrown toenail” in a clear allusion of a “joke”, “blague” or joking joke.

Of 3,130 samples collected by the agency, 29% showed some type of irregularity. The difficulty increases in situations where the substance penetrates.

According to the doctor Wanderlei Pignati, the statistics do not show these diseases related to pesticides because it is difficult to do tests to identify toxic substances in the body. “Here in Mato Grosso, if I want to do a suspected analysis of pesticide residues in the blood or urine, I have to send the sample to Rio de Janeiro or São Paulo”.

“ANDEF considers it essential to reassure the population about the safety of food treated with pesticides applied in accordance with agronomic recommendations and officially registered,” said the institution in a note released to the press.

The concern with toxic residues in food gained strength when a report by the National Health Surveillance Agency (ANVISA) indicates the high presence of pesticides in Brazilian foods.

According to Anthony Wong, medical director of the Toxicological Assistance Center (CEATOX) of the USP School of Medicine, “if the pesticide is on the surface, its application is limited to the outside of the food, the risk is eliminated most of the times by washing well” , says. The strawberry and tomato cases, for example, could be “easily resolved” like this. But as already seen, today the pesticides used are predominantly systemic or metabolic.

Doctor Wanderlei Pignati, professor of Environmental Health at the Federal University of Mato Grosso (UFMT), is more skeptical about water. For him, “washing food solves practically nothing. It will eliminate the pesticide that is in the bark, but the big problem is inside ”, he says.

It must be emphasized that nothing is against free enterprise. Undoubtedly it always has been and it seems that it will always be the system that best welcomes freedom and democracy. But a new systemic autopoise for the social arrangement is urgent, especially in this irresponsible exposure to which human life is submitted.